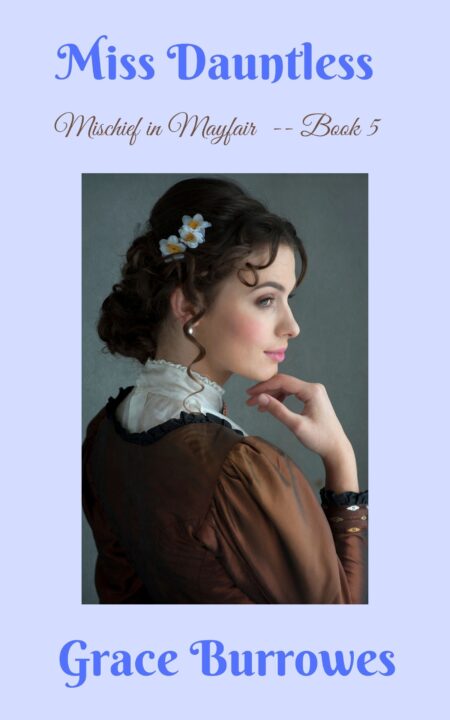 Book 5 in the Mischief in Mayfair series

Matilda Merridew, former hoyden of the first water, finds herself widowed, weary, and in want of coin. Along comes Marcus, Lord Tremont, with an interesting–and decent–proposition. Tremont will provide Matilda a handsome salary and keep a commodious roof over her head if she will relieve him of the burden of managing a houseful of unruly former soldiers.

Matilda accepts the post, and soon learns that the proper, soft-spoken earl has a far more dashing side. Marcus, whose lodestars in life have been order and duty, is drawn to Matilda’s determination and pragmatic good cheer. When Matilda’s past rises from the grave to destroy any hope of a happily ever after, Matilda and Marcus will have to decide if love truly can conquer all!

“That is an earl, Thomas,” Matilda Merridew said quietly. She’d crouched down to peer at her son at eye level. “The earl of Tremont is a peer of the realm, an important man, a lord.”

Also a bit stuffy, based on what little Matilda knew of him. The Earl of Tremont was a young man, and attractive enough. He was dark-haired, lean, tall, and exquisitely turned out. His reputation among the former soldiers who’d served with him was one for rules, policies, and proper decorum.

If any force on earth was not inclined in those directions, it was Matilda’s five-year-old son.

“I am an important boy,” Tommie replied, grinning. “My mama loves me best in the whole world!”

He’d nearly yelled that proclamation, his voice carrying to every corner of the church hall. Vicar Delancey sent her a pained smile, Mrs. Oldbach flinched but tried to ignore Tommie’s outburst, and Mr. Prebish—current dominus of the pastoral committee—glowered at Tommie, then at Matilda.

The earl, fortunately, remained in conversation with the vicar’s son-in-law, one Major Alasdhair MacKay.

“I do love you best in the whole world,” Matilda said, putting a hand on Tommie’s bony little shoulder lest he hare off to make a cave out of the cloaks and coats hanging in the corridor. “I also want to be proud of you, and if I’m to take the minutes for this meeting, then you must stay out of trouble.”

A limb of Satan, did Tommie but know it.

“You are not always in trouble. You are simply lively.” Exhausting was a more accurate term. “For the next hour, you will please look at your picture book, practice writing your name, and be quiet.”

Tommie would try, he truly would. He’d turn a few pages of his picture book, he’d even pick up the pencil and wave it about or make a few scratches on the paper Matilda had fetched from Vicar’s office, but Tommie had a constitutional aversion to extended periods of quiet while awake.

Mrs. Oldbach clapped her hands. “Tempus fugit, my friends. Lord Tremont is a busy man, and it’s time we brought our meeting to order.”

Mrs. O was a fixture at St. Mildred’s. White-haired, imperious, well to do, she exuded a perfect balance of Christian good cheer and elderly ruthlessness. Matilda kept Tommie as far from Mrs. O as possible.

“Please be good,” Matilda said, kissing Tommie’s crown and moving to the table in the center of the hall. She took up her post as scribe at the right hand of the chairman’s seat and angled her chair to give her a clear line of sight to Tommie’s corner of the room. He’d plopped himself on the floor and dutifully opened a picture book, but his gaze was leaping all over the hall.

Matilda had packed not one but all three of his picture books, the old stuffed horse that he now sought only at bedtime, two pencils—Tommie invariably broke his pencil points—and some string. The church cat could be counted on to entertain Tommie for two minutes at a time if that good beast was in residence.

Tommie cupped his mouth with his hands and bellowed. “I’ll be good, Mama!”

More winces and scowls greeted that announcement. The earl glanced over at Tommie as if noticing the boy for the first time. Matilda mentally prepared for lordly disdain—children did not belong at business meetings, not even church business meetings.

Merciful angels, deliver me now. St. Mildred’s was a prosperous congregation, though a far cry from St. George’s in Hanover Square. Peers did not frequent St. Mildred’s, and the earl was very much a visiting dignitary.

The whole room went quiet, with gazes bouncing between the boy and the peer. Mr. Prebish looked positively eager to hear Tommie on the receiving end of a tongue lashing. 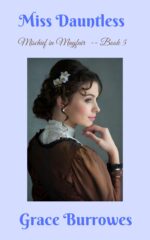 His lordship excused himself from his conversation with Major MacKay, and walked over to where Tommie sat on the floor.

Matilda did not care that Tremont was an earl, a wealthy man, a noted philanthropist, and a former officer. She marched over to Tommie’s corner, prepared to inform his lordship that nobody scolded her only begotten son merely for being friendly.

Tremont extended a hand in Tommie’s direction. “Tremont, at your service, Master…?”

Tommie scrambled to his feet and wrung the earl’s hand. “I’m Tommie. Tommie Merridew. This is my mama.”

Tremont extricated his lordly paw from Tommie’s grasp and bowed to Matilda. “Madam, you have me at a disadvantage.”

“Matilda Merridew, my lord.” She bobbed a hasty curtsey.

“My amanuensis on this august occasion, I believe. Tommie, a pleasure to have made your acquaintance. I was told St. Mildred’s is a friendly house of worship. Your Mama and I must tend to business for the nonce. You will keep that story book in good repair until I can make proper inspection of it. Mrs. Merridew.”

The earl gestured in the direction of the table. Tommie, for once, was silent, so Matilda preceded his lordship to the table and managed not to faint from shock when he held her chair.

The earl called the meeting to order, and a discussion began of hiring former soldiers to look after St. Mildred’s grounds. His lordship’s charitable endeavors included housing a dozen such worthies, and setting them up in some sort of business was his present aim.

The sexton had vociferous objections to anybody tending to the churchyard but himself, until Lord Tremont suggested that any lot of former soldiers did better when somebody was appointed to supervise their efforts. Moreover, gravedigging was a skill known to all former soldiers, alas, and one suited to younger men who benefitted from regular vigorous exertion.

Matilda bent over her notes, while keeping one eye on Tommie, who was imitating Tremont’s hand gestures. The earl’s hands were graceful, his manner dignified, but more than anything, his voice held Matilda’s attention.

Tremont moved the discussion forward with polite dispatch. Whether he agreed with the committee member who held the floor or not, he thanked every participant for sharing their thoughts. He listened. He asked sensible questions, and again listened to the answers.

Nobody dared interrupt or talk over anybody else, nobody dared make a ribald aside. The meeting was the most civilized exchange of ideas Matilda had observed. That Tommie was a witness to this gathering gave her all manner of maternal ammunition for good examples.

The orderliness of the meeting, aside, Lord Tremont had the makings of an orator. Before he spoke, he took a moment as if gathering his thoughts, and when he replied, his words were chosen for precision and economy. All that was lovely—the fellow made sense even as he flattered his listener—but what upended Matilda’s usual indifference to any and all things male was the beauty of Tremont’s voice.

He created a flowing stream of golden elocution in a well modulated baritone. His words resonated with courtesy, reason, benevolence, respect for his audience… all the gentlemanly virtues made audible.

If he ever set out to be charming instead of polite, he’d be dangerous. Matilda mentally shook herself for even speculating on such a topic, and pretended to add something to her notes.

She was erasing that nonsense when Tommie began to sing. Being Tommie, he did not sing a venerable old hymn or a sweet little nursery rhyme. He burst forth with Burns’s “Green Grow the Rushes, O,” an earthy tribute from a man to the charms of the ladies.

While Matilda scrambled about for a means of discreetly silencing her son, Tommie caroled on. The sweetest hours that e’er I spend/Are spent among the lasses, O…

Had the Earl of Tremont not been present, Mr. Prebish would have been leading a charge to silence Tommie’s warblings and assign him a penance. Instead, the committee of the whole waited to see how a peer of the realm dealt with a Proper Limb.

“Master Merridew.” Lord Tremont’s voice carried without having been raised, and yet Tommie paid him no heed.

The vicar looked as if a post in Cathay had developed compelling appeal. Mrs. Oldbach’s lips were pressed together very firmly, and Captain MacKay was grinning.

Worse than that, much worse, was MacKay joining in for the next verse. Auld Nature swears, the lovely dears/Her noblest work she classes, O!/Her ’prentice han’ she try’d on man/An’ then she made the lasses, O!

“While we appreciate your impromptu serenade,” the earl said, “there is work to be done. Come here if you please.”

To Matilda’s astonishment, Tommie did not order the earl to instead come to him. Tommie viewed matters logically, which often made him sound impertinent. Superior height did not make adults superior in any other way, otherwise—according to Tommie’s reasoning—the tallest man would be king, and the shortest a beggar, but there were tall beggars and short kings.

And yet, Tommie scampered over to stand by the earl’s chair. “Mama taught me that song, but she has a much prettier voice than I do.”

“Very gallant of you to compliment your mama,” Tremont said, hoisting Tommie onto his lap. “Pay attention, young sir. This is a gavel.”

He held up the chairman’s gavel, but did not let Tommie grab it.

“Not a hammer, a gavel. When the chairman applies his gavel thus to the tabletop, silence reigns. Give it a bang if you don’t believe me.”

Tommie walloped the table with the gavel and the whispering among the committee members stopped.

“There, you see, lad? Not a hammer, a gavel with all the special powers attendant there to. As the vice-chairman of this meeting, you will bang that gavel when I tell you to, as many times as I tell you to. You will not permit anybody else, not even your dear mama, to touch the gavel doing the progress of the meeting. Three whacks now, for practice.”

“Very good. When you are not required to man the gavel, you may draw toads, if your mama would oblige you with some paper and a pencil. All gentlemen acquire basic artistic skills, and the sooner your start the sooner you will master the challenge. If you are already proficient rendering toads, you may attempt a dragon or the very difficult unicorn. You will please recall the meeting to order.”

Tommie twisted about to send Matilda a questioning glance.

“Two raps,” she said. “One right after the other. And then you say, “This meeting will now come to order.”

Tommie vigorously executed the duties of his office. For the next forty-five minutes, he seemed quite content occupy the earl’s lap, and draw all manner of mythical beasts while quietly humming Burns’s ode to the ladies.

This book will begin shipping on November 2, 2022

Miss Dauntless is available in the following formats:

Miss Dauntless is Book 5 in the Mischief in Mayfair series. The full series reading order is as follows: