Book 2 in the Mischief in Mayfair series

Miss Dorcas Delancey, vicar’s daughter and advocate for the less fortunate, has been  guarding her heart from fortune hunters and fashionable fribbles for years. She’s completely unprepared for Alasdhair MacKay, former officer and all around grouch, to steal that heart. But when Alasdhair takes on responsibility for a motherless infant whom Dorcas’s family won’t acknowledge, she sees the honor lurking beneath his gruff mannerisms.

Alasdhair MacKay did not storm hell with Wellington’s army just so he could drink, swive, and flirt his way through life after Waterloo. He’s serious, intelligent, and passionate about his causes–also passionate in his regard for Dorcas. He’s the man of her dreams and a paragon in plaid, but looming scandal means Dorcas will have to choose between love and the honor Alasdhair so relentlessly values.

“That is a baby.” Alasdhair MacKay stood back lest the infant or the woman holding the baby touch him as she sailed over the threshold into his foyer.

“How astute you are, Major MacKay.”

“Former major.” Alasdhair closed the door because the day was chilly and babies were fragile. Also because this situation needed no witnesses among the nosy neighbors. “And who might you be?”

He turned his signature commanding office glower on the woman, and allowed his burr to deepen to the consistency of a growl. He did not so much as glance at the wee bundle in her arms, one glimpse of a cherubic pink face being more than enough.

“Miss Dorcas Delancey.” She dipped a curtsey, baby and all. “This good fellow appears to be your son, so I will leave him with you—”

“He is not my son.” Of that Alasdhair was emphatically sure.

She turned earnest gray-green eyes from Alasdhair to the baby and back again. “Perhaps not your legitimate son, but there is a certain—”

“Newborns of northern British stock all have blue eyes. That child is not my son, and you and I have not been introduced Miss Delancey.” Alasdhair would recall an introduction to a such a woman. She wore propriety and decorum like a Sunday cloak, and could probably deliver whole sermons on mankind’s fallenness.

Other than that, she made an unremarkable impression, from those eyes, which were neither slate nor emerald, to her hair which might have aspired to auburn but stopped just past dark brown. Her features were elegant, though any emotion in them was diluted by a briskly unsentimental detachment.

Miss Delancey’s gaze appeared to neither approve nor disapprove, merely to observe.

She would be difficult to shock, and even harder to impress.

As was Alasdhair, did she but know it.

“He’s not a newborn,” she said. “The child is a good six months or thereabouts. He’s beginning to teeth, you see, and that is a good thing. The landlady heard him yelling and realized his mama was not with him. He was having rather a bad time of it.”

A coldness assailed Alasdhair, the same coldness that had come over him in battle. His body would function with heightened efficiency, his mind would leap along paths of strategy and intuition, while his heart turned to granite.

But there was no battle here. No enemy. Only this well dressed female with her drawing room English and earnest gaze, along with that… that bundle of trouble.

“I am sorry for the lad’s misfortune, but he is not my son.”

“He is still your responsibility.” She unfurled the word responsibility like a pristine banner of righteous certainty. “Melanie Fairchild named you as his guardian, and as she is no longer extant, and her will is quite clear, that makes you—”

The coldness had never made Alasdhair light-headed before. “I saw her just last week. She was in great good health.” Melanie, like so many of the women offering themselves on London’s streets, had been a good girl once, the kind to suffer terribly when deemed no longer worthy of that appellation. She’d been quiet when last Alasdhair had called on her, perhaps tired. Only that. “She cannot be dead.”

“I am sorry,” Miss Delancey said. “You cared for her.”

“Of course I cared for her.” Alasdhair cared for them all, fool that he was. “She had come so far, against such odds. She had a cousin or auntie who was helping her, though the rest of her family was a worthless pack of pious hypocrites. She doted on that baby, went on and on about him.” 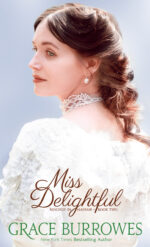 What a smart lad he was, how merry, what a good sleeper. Melanie had rhapsodized about one tiny infant, and referred to him as her reason for living.

“I apologize for being the bearer of sad tidings, Major, but you will have young John here to console you.”

The baby gurgled, a happy sound accompanied by a tiny fist flailing in the direction of Miss Delancey’s not-quite-dainty nose.

“Might we continue this discussion somewhere warmer, Major MacKay.”

“Plain MacKay will do.” The dictates of gentlemanly deportment required that Alasdhair take the lady’s burden from her, but he could not. “This way.”

He led her through a townhouse that was more of a roofed campsite than a dwelling. London was not his home, God be thanked, but he bided here from time to time and had cousins here. No siblings, and certainly not a son.

“My study,” Alasdhair said, opening the door reluctantly. “My guest parlor is unheated.”

Equally important, the guest parlor had windows visible from the street, and the draperies on those windows were tied back, the better to display Alasdhair’s social life to any passerby.

Fortunately, he had no social life.

Based on the lady’s merino wool cloak, matching blue gloves, and nacre buttons, she was one of those women who thrived on going from friend to friend collecting gossip. She would expect a tea tray. Where were her chaperone, lady’s maid, and footman for that matter?

“It’s half-day,” Alasdhair went on, “which is why you find me answering my own front door and without help in the kitchen.”

“You will need a wetnurse,” Miss Delancey said, taking a place in the middle of Alasdhair’s favorite napping sofa. “I’ll have Mrs. Sidmouth send along Melanie’s effects, and I’m sure the baby’s dresses and whatnot will tide you over for a time. He’s taking some cereal, but he wasn’t yet weaned.”

Alasdhair remained on his feet, pacing the length of the carpet. “Miss Delancey, I care not which society for the oppression of beggars you represent. I have no need to know which variety of meddling fool you are, but I must observe that your hearing appears deficient. I cannot take in that baby. I am a bachelor. I have no staff to care for a child. I have no wish to care for a child.”

Not quite accurate. He’d save them all if he could, and their mothers, but he had no ability to care for a child. “Has anybody seen to Melanice’s final arrangements?” He could not bear the thought of her lying in a pauper’s grave, nobody to mourn her, nobody to leave a single flower.

“Please do sit, Mr. MacKay. You have had a shock.”

Why were women such as Miss Delancey always telling others what to do? “How did she die?”

Miss Delancey adjusted the blanket swaddling the baby. “She surrendered herself to the embrace of Father Thames. No inquest has been held because we have no body. A woman fitting Melanie’s description made her way to the Strand Bridge last night, and Melanie’s favorite bonnet and slippers washed up on the morning tide.”

The proper name for that newly-opened bridge was Waterloo Bridge, an irony when many of the women who chose to die there were war widows. Alasdhair perched a hip against the battered desk. He’d have a word with the river police, and see what the mud larks had to say.

First, he had to get this woman, and that baby out of his house. She would see to the lad, come fire, flood, famine, or hard freeze….

Order your copy of Miss Delightful!

Miss Delightful is available in the following formats: 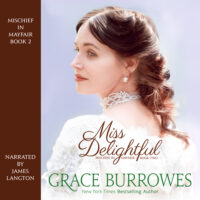 Miss Delightful is Book 2 in the Mischief in Mayfair series. The full series reading order is as follows: