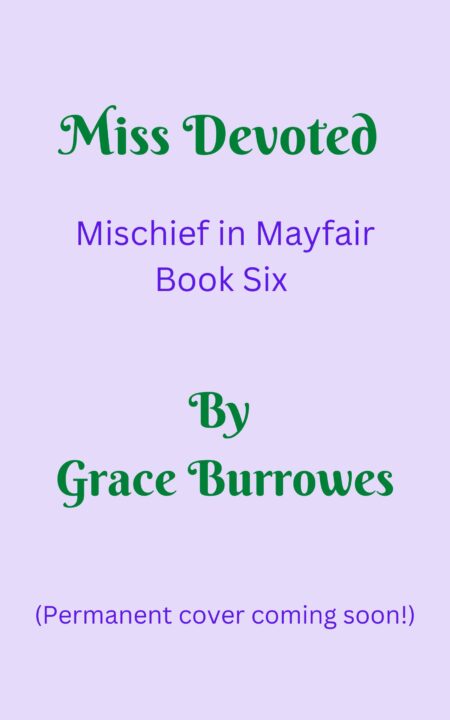 Book 6 in the Mischief in Mayfair series

Psyche Fremont has known two constants in life: Her passion for her art, and society’s determination to ignore her talent. She isn’t looking for anything other than a handsome model when she crosses paths with Michael Delancey, and he’s only interested in making a few discreet coins lounging about in the altogether. Both Michael and Psyche are guarding secrets, but when love blooms, can they continue to guard their hearts?

Michael Delancey—vicar’s son, ordained priest, and rising star at Lambeth Palace—shrugged out of his dressing gown and let his mind go quiet. To be naked in a room full of intently staring strangers had become a sort of relief.

The instructor made a few more remarks about the difficulty of accurately rendering hands and feet, and the necessity of paying attention to the smallest shadows—beneath the chin, below the ankle bone—and then Michael was posed, semi-recumbent on a chaise, one foot on the floor, one arm flung back over his head.

The posture was restful, though after twenty minutes, Michael’s arm began to tingle. The only sounds in the room were the soft scratch of charcoal or pencil against paper, the occasional cough, or one page being set aside so another could be begun.

The instructor, a fussy old Frenchman with a meticulous eye for detail, made an occasional murmured comment, and time drifted along in a peaceful trickle of moments.

“And now, mes prodiges, we draw more than the fingers and the toes,” Monsieur Berthold said. “We have noted before the regularities of our model’s features, the nobility of the brow, the fine angle of the chin, the lovely musculature, and the perfect symmetry of the dark brows. This man is quite attractive.” Monsieur’s remarks, while flattering, might have been describing a marble effigy, so dispassionate was his praise. “Now I pose him thus…”

Berthold demonstrated for Michael a sitting posture, one elbow braced on a thigh, gaze on the floor.

“Now, the handsome face is hidden. Draw this man so that without seeing his eyes, without knowing the set of his mouth, or the angle of his nose, he conveys merriment. He is about to spring up and give a shout of joy, to laugh with great glee.”

Michael, staring at his feet—scrupulously clean, second toe longer than the great toe—could not see the consternation in the room, but he could feel it in the silence that greeted Monsieur’s challenge. Monsieur had a whole speech about the difference between an artist and a draftsman. The draftsman rendered accurate likenesses and could make a fine living doing so.

The artist put truth on the page, the whole truth. The visual truth, the emotional truth, the moral truth. All a bit high flown when the audience was a room full of young men many of whom were more adept at draining a bottle than drawing that same bottle in slanting sunshine.

One lone stick of charcoal began scratching away. High up, farthest from the center of the room. That would be young Mr. Henderson, who preferred the longer perspective. Slight, blond, barely emerging from adolescence. Henderson never said much, but when he did pose a question to Monsieur, the answer came without the usual garnish of sarcasm and criticism.

Henderson had talent and didn’t feel compelled to bruit that about. Lord Dermot Anthony, by contrast, had sizeable talent and an even bigger mouth. Always in the front row, close enough that Michael could smell the fetid aroma of debauchery blended with expensive shaving soap wafting from the lordly person.

Everybody liked Lord Dermot, and even Monsieur offered him the occasional encouraging remark. Lord Dermot’s mama, the marchioness of Stanbridge, was a noted patroness of the arts.

As the minutes crept by, Michael mentally steeled himself for his next obligation, dinner with his sister and her doting husband. Dorcas had chosen well, and she set a fine table. Alasdhair MacKay, Michael’s brother-by-marriage, was a fine fellow with a sly sense of humor and a fondness for smooth whisky.

The drudgery though, of being polite and mannerly toward some pretty widow or spinster in training for three or four hours… The hope in the lady’s eyes, the determination in Dorcas’s, and the sympathy in MacKay’s…

The session came to an end, and Bertold passed Michael his robe. “Our thanks, as usual. We will see you again on Tuesday, sir.”

Michael donned the dressing gown and belted it loosely, then took himself to the changing room. Clothes maketh not the man, but rather, the masquerade. A priest wore sober attire, though he need not be shabby.

Michael enjoyed fine clothes. Perhaps if he showed up at Dorcas’s with a stain on his cravat and a smear of charcoal on his cuff… But no. Dissembling for personal gain would not do.

He was making his way through the academy’s grand foyer, wondering if he had time for a quick stop on Circle Lane before he was due for dinner. Just fifteen minutes, not really a visit, more of a sighting. He was too intent on his plans to watch where he was going, and thus he and Henderson collided right in the doorway.

“Beg pardon,” Henderson muttered, tugging down his hat brim. “Entirely my fault. Do go on.”

“My apologies,” Michael said, bowing. “I was pre-occupied. After you.”

Henderson bustled through the door and jogged down the steps, soon disappearing among the pedestrians thronging the walkway. Michael stood on the terrace, reviewing what he’d just learned. 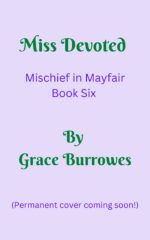 Henderson, who preferred to sit in the studio’s most shadowed corners, who rarely spoke at all, and who never joined in the general jockeying for status with the other students, was apparently distinguished by more than talent and eccentricity.

Henderson had the unmistakable bodily endowments of a well-formed woman.

This book will begin shipping on February 21, 2023

Miss Devoted is available in the following formats:

Miss Devoted is Book 6 in the Mischief in Mayfair series. The full series reading order is as follows: